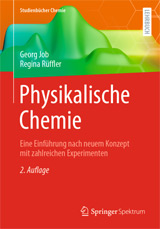 It is common day experience that gases become warmer on compression. We want to use the simple experiment (figure shown below) of a gas contained in a piston to investigate the properties of heat and entropy closer.

The cylinder is filled with an ideal gas. As the plunger compresses the gas, two heat effects can be observed nearly simultaneously. First, the temperature of the gas increases as long as the plunger moves into the piston, and secondly with a small delay in time, the environment becomes warmer. The latter effect can be explained by the entropy squeezed out of the gas on compression, since an entropy uptake of any body causes its temperature rise. The entropy flux out of the piston corresponds to an isothermal compression while the temperature increase correspond to an adiabatic one. Without any modifications of the experiment, a mixture of both types is observed and the properties of the system can be described only with difficulty.

While the entropy flows through the conductor into the ice-water calorimeter, additional entropy is created and both entropies melt some ice. Since ice has a lower density than water, the volume of the ice-water mixture decreases on the entropy uptake and the water level in the capillary decreases therefore too. This decrease is larger than expected from the entropy flux out of piston and if the plunger is brought back into its original position, the water level in the capillary does not reach initial its level due to this extra entropy. It is therefore impossible to move the plunger cyclically without generating entropy, even if the plunger moves frictionless.

The Simulation
The Java-Applet simulates the experiment shown below (Details of the simulation may be read be clicking on the corresponding part of the apparatus.). The user can choose from a variety of heat conductors, the amount (amount substance nP and pressure pP) and type (heat capacity cV) of gas in the piston, the velocity of the plunger back and forth and the duration of the simulation.

On starting, the programm will calculate to what extend the temperature of the gas rises and how much entropy flows out of the gas simultaneously. During the entropy flow through the heat conductor the temperature profile of conductor the differential entropy generation are calculated. As the entropy flux of reaches the calorimeter the water level in the capillary is computed. The progress off the simulation can be observed (on request graphically) in the change of many system variables. 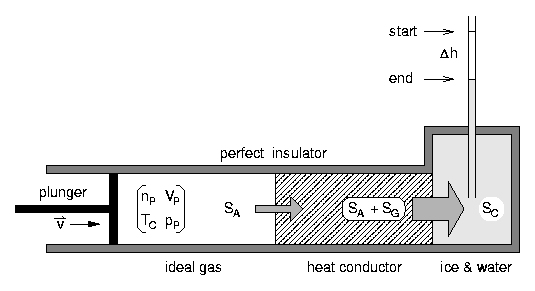 An Estimate on the Size of the Effects
An estimate of the level change in the calorimeter can be done in 6 steps:

Results from the example and the simulation.

The simulation fails to reproduce the maximum temperature of the gas TA. Despite the high compression velocity (v = 100 l/sec) some entropy can escape from the piston before the maximum is reached after t = f * Vp * v-1 = 0.11 seconds. Since the temperature is slightly smaller in the simulation, less work WA = 1.998 kJ has to be done to compress the gas. The amount of entropy in the calorimeter SC = 1.998 kJ / 273.15 K = 7.135 J/K is therefore also smaller in the simulation than estimated.

The maximum entropy release from the piston SP does not depend on TA and the difference between the estimated value (nP * R * ln f) and the one from the simulation has therefore an un-physical reason. The quality of the simulation depends strongly on the chosen simulation-parameters1 and the computer hardware and/or the Java environment. The discrepancy between the estimate and the simulation is caused by a lack of precision. Increasing the numbers of steps per second to 5*105 results in SP = 5.762 J/K and SC = 7.323 J/K 2. An increase in accuracy is therefore paid with the duration of a single simulation. Therefore, the simulation parameters have to be chosen carefully to suit both didactic and numerical demands.

Bugs and Problems
If you manage to annihilate entropy, please do not order your tickets for Stockholm, but check the following simulation details first.

In order to maintain the quality of the software we need your feedback. If you find a bug in the software or have a question concerning the software, please contact one of us: